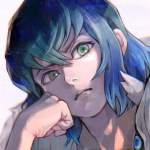 ATTENTION: I NO LONGER FREQUENT OR EDIT HERE. YOU CAN FIND ME AT KUROSHITSUJI WIKI!

Hey! I'm a fanboy of Mirai Nikki (aka Future Diary), and of course, Lau (a character from this aweshum series called Kuroshitsuji)! He's funny. Anyhoo, I'm often enthusiastic and easygoing, and I love meeting new people. I will spontaneously incorporate Spanish words in my speech to show off my three years of Google translate skills proficiency in that language.

My favorite foods are wonton (I like the name), ricecakes, spicy noodles, chow mein, and fried chicken (can't get enough of finger-lickin' good, KFC!). Ideal birthday gift: Cash. Just cash, loads of 'em. Some SNK or HXH or Kuro merchandise would be good too.

If anyone needs help, just message me on my message wall. I only bite food, not human beings.

Retrieved from "https://futurediary.fandom.com/wiki/User:MasterLau?oldid=10741"
Community content is available under CC-BY-SA unless otherwise noted.