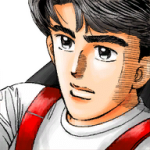 Human, God (Both in 1st world and 3rd world)

Auto and Tech
Sukouto Hari (スコット針, Hari Sukotto) is one of the toughest Diary Holders and is part of the Survival Games with the diary of "Auto and Tech".

Sukotto Hari is a young boy with dark red eyes and brown hair. His appearance is primarily based on Akio Asakura from 湾岸 Midnight.

His diary, the "Auto & Tech" diary acts as a GPS tells him about any vehicles nearby government vehicles, vehicles belonging to other diary holders, friends, and family.

Sukotto, is able to track down any of his enemies and other diary holders using the GPS tracker in his Auto & Tech Diary to chase them and shut them down.

His theme song during the day is "Move On" and "Driving Instinct" during the night, both by Yuzo Koshiro.

His first car ever driven in his life is a blue 1973 Nissan Fairlady Z (S30) given to him as a gift by his older brother. As he grew more experienced with driving he'd tune up his Z and eventually tuned it up to 600 Horsepower with an L28 Twin Turbo engine inside.

Retrieved from "https://futurediary.fandom.com/wiki/User:ExoticShadow?oldid=15959"
Community content is available under CC-BY-SA unless otherwise noted.